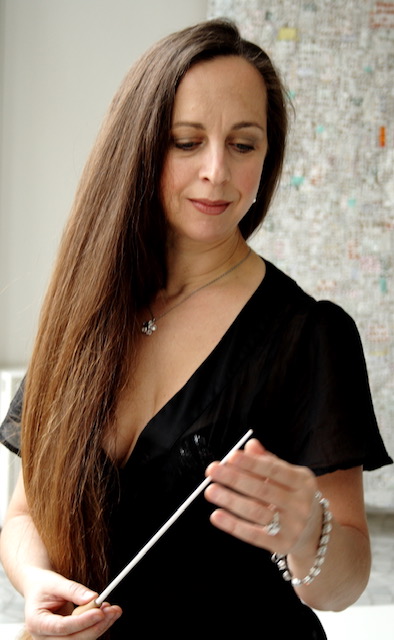 One of the most versatile artists of her generation, Elda Laro’s dream was always to one day express herself through the baton. As a conductor, pianist, chamber musician, harpsichordist and accompanist, the child prodigy from Scutari, Albania playing Beethoven’s Piano Concerto no.1 at the age of only 11 with the National Orchestra went on to be selected as one of the most promising young Albanian musicians and was awarded an overseas scholarship allowing her to study with renowned pianist Remo Remoli at Conservatorio Giuseppe Verdi in Turin, Italy. Elda is currently coach, pianist and staff conductor at the prestigious Deutsche Oper in Berlin and has performed with many of the world’s greatest in classical music.

At the helm of the Orchestra of Teatro Massimo Bellini in Catania, she recently conducted Mozart’s Coronation Mass and Beethoven’s Piano Concerto no.2. In 2015 the National Opera in Tirana invited her to debut Vincenzo Bellini’s I Capuleti e i Montecchi. After much success Mozart’s Così fan Tutte directed from the harpsichord and a staged chorus / ballet performance choreographed by Youri Vàmos of Orff’s Carmina Burana soon followed. During her years as Head of Music at the Münster Theatre and vocal coach at the university there, Elda was also chief conductor of the Münster Concert Choir performing regularly concerts and oratorio including an extensive tour of Italy with Brahms’ Ein Deutsches Requiem.

She studied conducting with Rüdiger Bohn in Düsseldorf and masterclasses include Donato Renzetti, Roberto Rizzi Brignoli and Maurizio Arena. Elda’s eclectic passion for learning including 10 years as a violinist, fluency of five languages; Italian, English, German, French and Albanian as well as an avid chamber musician gives her a solid base like many of history’s greatest opera conductors.

Her piano studies have taken her from Paris, where in 1995-96 she was awarded a scholarship to study contemporary music with world renowned pianist Claude Helffer, to Salzburg, studying under Alfons Kontarsky. Elda’s expertise of contemporary music was recently seen when she was chosen to prepare the world premiere of the opera Wir aus Glas by Yasutaki Inamori, a collaboration between the Deutsche Oper and the Biennale in Munich.

A much sought-after accompanist in song recitals, recent concert appearances include distinguished artists such as Ermonela Jaho, Saimir Pirgu, Dimitra Theodossiu with whom she appeared at London’s Wigmore Hall (also on CD) and the late tenor Marcello Giordani at the Athletic Club in New York City. As a pianist, she had also collaborated with Mirella Freni, Carlo Bergonzi, Roberto Alagna, Renato Bruson, Fiorenza Cossotto and Edda Moser.

During the 2019/20 season Elda accompanied on tour, singer and world-leading cabaret star Ute Lemper at the Berlin Philharmonie, Hamburg’s spectacular Elbphilharmonie, Alte Oper Frankfurt, the Tonhalle Düsseldorf and other major European venues under the direction of Antonello Manacorda.

As a recording artist, Elda Laro received critical acclaim for her Chandos CD of Bottesini chamber music awarded 5 stars by the Financial Times. Numerous awards include First Prize at the Concorso di Moncalieri in Turin (1991), Rassegna di Vittorio Veneto (1996) and Concorso di Grosseto (2000). In 2009 Elda was awarded the prestigous Premio Danzuso by the “Amici della Musica di Catania“. Following her studies with the Accademia del Teatro alla Scala in Milan, Italy, Elda held positions at Festival d‘Aix-en-Provence, Teatro Regio in Turin, Tiroler Festspiele Erl, Arturo Toscanini Foundation in Parma and at the Ravenna Festival before joining Teatro Massimo Bellini in Catania for twelve years. Committed to sharing her expertise, Elda regularly gives masterclasses as a vocal coach. For the last 5 years she has taught in Portocomaro, Italy.

In May 2021, Elda will perform in Antwerp with Albanian soprano Ana Naqe and the contemporary dancer Nadine Baboy in two separate live streamed concerts featuring the music of Janaçek and Korngold respectively. In June, she returns to Opera Theater of Tirana to conduct Donizetti’s Elisir d’Amore. This summer, she will also perform at the Festival “Mik” in Korça (Albania) with the Trio Deutsche Oper Berlin and conduct Menotti’s The Medium at Moscow Conservatory. On September 5th, she will perform in recital with star Albanian soprano Ermonela Jaho the Palacio de Congresos in Palma de Mallorca.